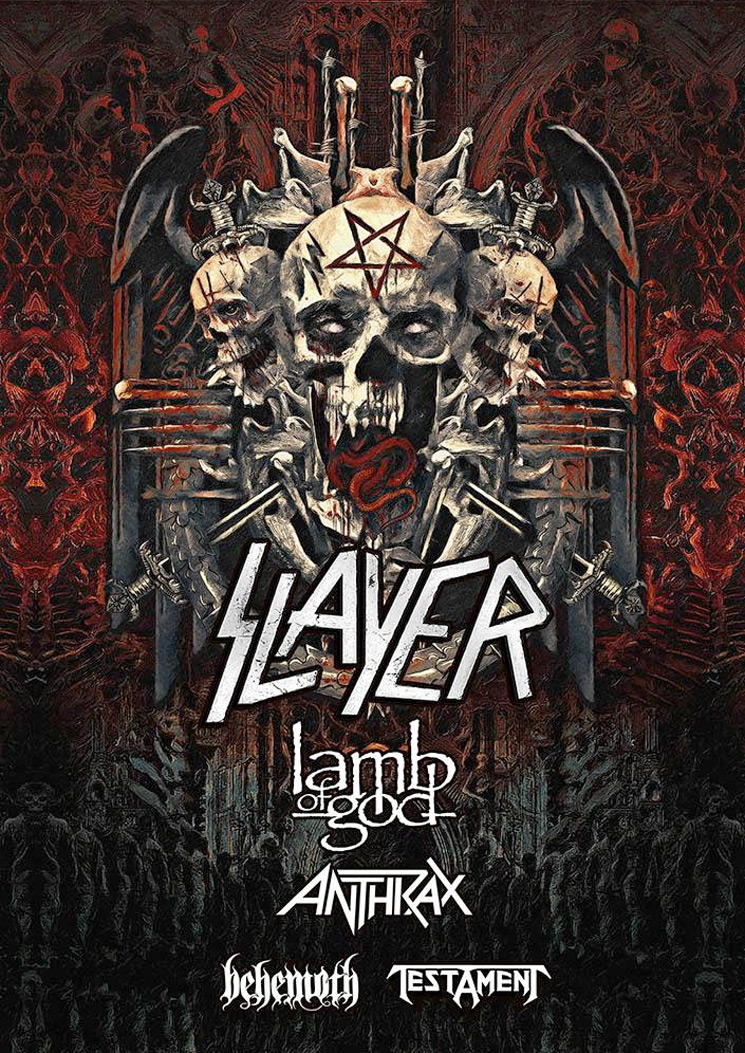 The band shared a short video teaser today (January 22) announcing that “The End is Near… Slayer to tour the world one more time…” The clip, which you can find in the player below, cuts together a number band photos and show flyers from across the group’s storied career.

As Blabbermouth reports, the run in question is rumoured to feature Slayer alongside Lamb God, Anthrax, Testament and Behemoth. Slayer last toured with Lamb God and Behemoth back in 2017.

UPDATE (1/22, 12:30 p.m. EST): Slayer have now confirmed the lineup for the tour, which indeed will feature Lamb God, Anthrax, Behemoth and Testament. You can see the poster above.

Speaking with Loudwire in 2016, bassist/vocalist Tom Araya joked that “at 35 years, it’s time to collect my pension,” adding, “I’m grateful that we’ve been around for 35 years; that’s a really long time… When we started f, everything was great, because you’re young and invincible. And then there came a time where I became a family man, and I had a tough time flying back and forth.”

He continued: “And now, at this stage, at the level we’re at now, I can do that; I can fly home when I want to, on days f, and spend some time with my family, which is something I wasn’t able to do when my kids] were growing up. Now they’re both older and mature. So now I take advantage that…it just gets harder and harder to come back out on the road. Thirty-five years is a long time.”

This year marks Slayer’s 37th year as a group. Co-founding guitarist Jeff Hanneman died in 2013 from alcohol-related cirrhosis the liver. Co-founding drummer Dave Lombardo left the group that same year following a contract and pay dispute with his bandmates.

Slayer last released Repentless in 2015. You can grab some Slayer’s classic albums  MusicVaultz.