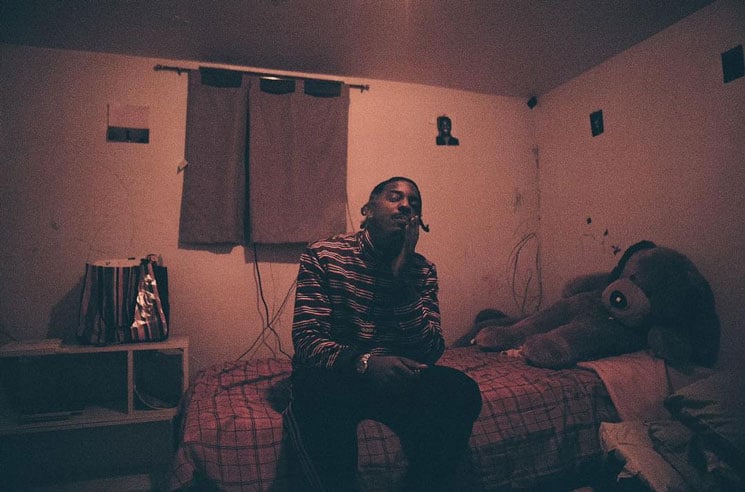 “I really feel like this place was supposed to kill me,” Toronto rapper Sean Leon tells Exclaim! while sitting in his Parkdale, ON basement apartment. “I’m 6-foot-3, the walls are 6-foot-5 — it’s essentially a cage.”

That feeling entrapment that has driven the 26-year-old rapper to consistently push his boundaries, his visions, and how far his music can go; it’s that same feeling that has allowed the once-homeless artist to trust in his creativity, fully, wholly and with no apologies.

“I think it’s been a very long time since Canada has had an artist that can eloquently get across certain points while challenging the status quo, while still being very in touch with what’s going on currently. A lot people are desperate for change —  a lot more people than are currently] being documented,” Leon says.

Almost a year to the day after a sold-out screening his film. Life When You’re the Movie, at the Royal Cinema in Toronto, Leon is preparing for a new fan experience that converts his old home and studio into an interactive pop-up museum appropriately called, “Up Out the Basement.”

“This basement, for me, is such a big deal, because it feels like a championship ring or a championship trophy,” Leon declares. “I was able to do a lot in this little space, and it’s just so important to me, and so sacred to me, that I wanted the work that I was able to make here, that was able to touch people all over the world, to be able to come here and see it. I could take pictures and shoot films in this space, but I think there’s something about being in it that’s priceless. I wanted to show people that it doesn’t take much to make these records, either, if you’re committed. It doesn’t take million-dollar budgets and co-signs. It doesn’t take powerful labels and tastemakers and influencers. It just takes somebody with a drive and commitment to being creative.”

In this enclosed environment, Leon was able to make his recent November film/music project, Can’t Come With Me This Time, a seamless album that reveals his strengths and vices, but sheds light on his family.

“I’m a big guy with a lot energy and personality, and I gotta get that energy out, and two rooms down is my daughter and her nursery — the quiet, safe space. My most protected space is my daughter’s room. She’s like my god. And in-between that is me and her mom, and her mom is also an artist — a brilliant artist with her own demons and her own anxieties, and she panics too, as I do, because this is the life we chose, and we’re living under one ro and somehow we maintained as a unit. We’re gang. There’s pride in proudly showcasing this place that was supposed to destroy me that couldn’t.”

Leon’s creativity has not only been used to separate himself from his peers, but also establish a cult-like fan base that holds on to his every word. However, despite the unrelenting respect, Leon is still an artist that’s struggling with fit into an music environment that wasn’t made for him, and work within a seemingly cash-poor infrastructure that negates the well-being musicians.

“It’s very much stacked up against everybody, but especially if you’re remaining independent, it’s tough — and if you’re independent in Toronto, it’s like… fam! The places I’m going, or the spaces I want to exist in, somebody like me isn’t usually welcomed there or not conventionally known for occupying that space. So, I’m always really feeling like the black sheep,” he affirms.

“I’m the guy who really doesn’t give a fuck about what popular song is out,” he continues, “I will not make a song that sounds like that. I’ll find something for myself and make it work on my own. I’m still from an era where there’d be four people on a song, and they all sounded different, but the song sounded great. But I’m also still young enough where I connect to what’s going on now, so I’m directly in the middle, and I think more than anything, that’s what I’ve been conditioned and prepared for my entire life — coming from the middle class, the middle nowhere, and being the middle child. All that culminated into me having this kind philosophy and this kind approach to things.”

Another middle ground Leon has found himself in is the gentrification — or
“revitalization” — Parkdale, a lower income, but vibrant immigrant-infused community. Though he says he hasn’t seen the affects on his music yet, Leon does believe the changing fabric is emotionally draining.

“I’m sad about the change, but change is change and there’s not really much you can do about it, you just kinda gotta get yourself prepared,” he says. “The block is clearly different from when I first came here to how it is now. I was thinking about it today, and it might sound selfish, but I was thinking about going to war with these landlords and what that would take, and what that would entail. But I’m thinking like, man, I’m already in the war my life with this music thing and I’m exhausted already.”

Despite the challenges, the IXXI Collective co-founder has continually found the light within the darkness, which recently included the Grammy nomination fellow IXXI member Daniel Caesar.

“That’s some shit we used to talk about that we all knew was possible, and it feels great to be proven right. That also fuels the confidence in the visions I have right now, and the visions I have for myself and for my team. The way I’m talking about these things right now is the exact same way we were all talking about getting a Grammy nod one day,” Leon says with excitement.

“I think overall for me, I’m going to start rolling out more the artist in 2018 and definitely solidify that there’s power in numbers. I get upset sometimes that people don’t know anything about Toronto, but they’ve never really had someone] go out their way and show them, so let me be that guy. The goal is just to see how far we can take it. It’s like a party and I don’t want to put a curfew on it; we don’t put a curfew on it because then it has to end at 11 p.m., and maybe it just getting poppin’ at 10:59 p.m. So, no ceilings and no ros, just dominance and infiltrating and penetrating these markets, and coming back with more results, more resources and better product.”

Find tickets and info about the “Up Out the Basement” exhibit here.