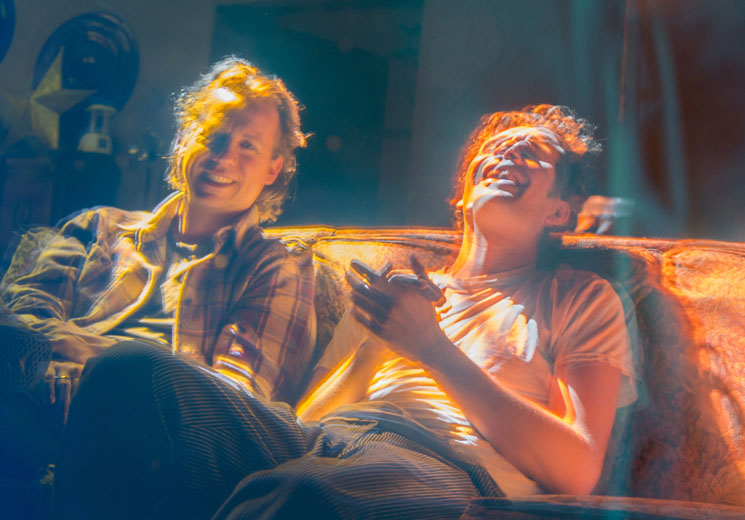 A decade ago, No Age defined everything that was great about late ’00s indie rock; the duo’s first three releases, Weirdo Rippers, Nouns and Everything in Between blended stripped-down experimentation with snooty punk rock, gaining overwhelmingly positive reviews in the process. After putting out the minimalist, challenging and underwhelmed An Object in 2013, drummer/vocalist Dean Spunt and guitarist Randy Randall took a sabbatical before returning with their latest, Snares Like a Haircut. Their first LP in five years finds the band returning to their roots, cutting a dozen tracks that triumphantly rekindle the band’s penchant for anthemic, high-energy crowd-pleasing rock.

“We were very aware that we wanted to write a collection songs that we could play live,” Randall tells Exclaim! “So when we recorded them, they had this sort feeling through the artwork and the overall vibe, it was us being kinda loose and not so serious and having fun.”

From the overdriven shoegaze glaze that covers album opener “Cruise Control” to the arena-sized drum sound on single “St Collar Fad” to Spunt’s bombastic vocals on “Secret Swamp,” No Age come f as confident and relaxed as they’ve ever sounded.

“We didn’t have that urgency, the feeling that everything and the kitchen sink had to go on this record,” says Randall. “The past three records we made were sort close to each other, like, ;Make a record, tour for a year and then record and then write another record right away,’ you don’t have time to really live, to spend time at home with friends and family.”

After a prolonged break in which Spunt and Randall each welcomed a son, the two-piece returned to the road in 2017, testing out new material for hungry audiences. “That had always been something that we’ve talked about, because we noticed, ‘Man, the songs always sound better at the end the tour,'” Randall says about the writing process. “We also wanted to create that vibe like, ‘Let’s go out for a week and play these new songs every night live and let that kinda help shape the songs and how we play and how the performance is on the record.'”

Although Randall dismisses the notion that nostalgia for the early days No Age helped shape the new songs, he does admit that they’ve been looking back at their fruitful career through their own droll lens. “We understand that this is just one album, one document, and then we’ll make another one, but I think that the name the album, Snares Like a Haircut is a comment on time. It was a joke that we came up with that the sound a snare drum is indicative when a record was made, the same way a haircut does. We’re not the same serious young artists that we were, so I think that there is this self-reflective kind humour in a lot things we do.”

Snares Like a Haircut comes out January 26 on Drag City.