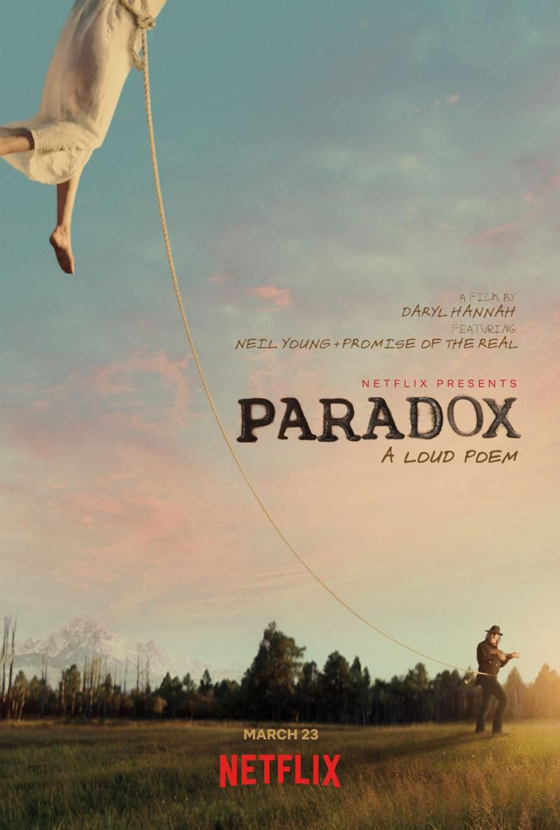 Early last month, we learned that Neil Young would be showing f his acting chops in Paradox, a Western film directed by actor Daryl Hannah (Blade Runner, Kill Bill). If you can’t make the film’s premiere at SXSW, it soon will hit Netflix.

Paradox will make its worldwide premiere on the service on March 23. As previously reported, the film from Young’s current romantic partner will also feature original music from Neil Young + Promise the Real. In addition, Paradox stars Willie Nelson, as well as his sons Lukas and Micah (who also play in Promise the Real).

The film’s synopsis reads as follows:

Time is fluid in this far-fetched, whimsical western tale music and love. Somewhere in the future past, The Man In the Black Hat hides out between heists at an old stagecoach stop with Jail Time, the Particle Kid, and an odd band outlaws. Mining the detritus past civilizations, they wait… for the Silver Eagle, for the womenfolk, and for the full moon’s magic to give rise to the music and make the spirits fly.

In a statement, Hannah said, “Paradox sprung up spontaneously and unexpectedly, like a peculiar dandelion, popping up between the cracks in the pavement. We were fortunate to find this brief window opportunity to share the love for the natural world, each other and for the precious seeds creativity and life. We are all thrilled the film will premiere at SXSW and that Netflix will be sharing it with the world.”

You can learn more about Paradox over here, and can find its poster above.