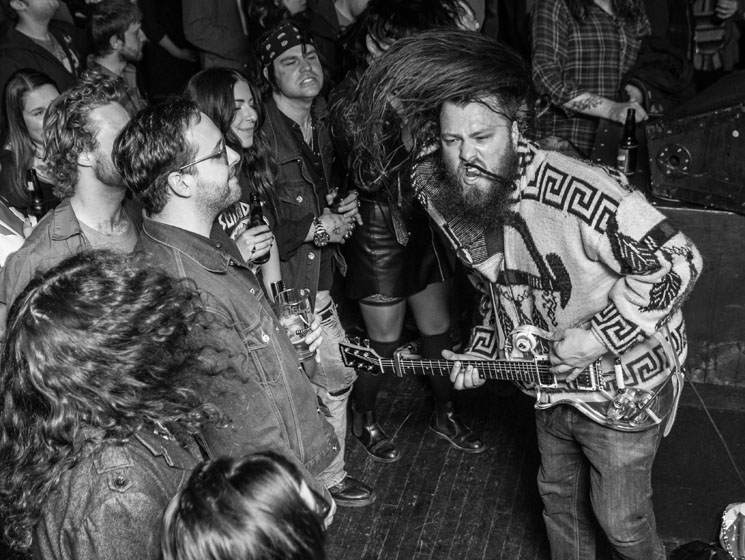 There’s an inescapable quality to WHOOP-Szo’s music, a heavy, fuzz-laden hodgepodge grunge, psych, folk and post-rock, incorporating influences from Elevator and Eric’s Trip to Black Sabbath. Founded in Guelph in 2009 by Adam Sturgeon and Kirsten Kurvink Palm, the project has since evolved into a five-piece band who call both Guelph and London, ON home.

But there’s more to WHOOP-Szo than just their music, as the band frequently pursue multimedia art projects across the American continent. Speaking with Sturgeon, it’s clear that WHOOP-Szo are using their music as a springboard for cultural and spiritual healing and learning.

WHOOP-Szo was formed as a way for Sturgeon and Palm to heal from intergenerational trauma.

“Kirsten and I met because our dads were in a program together, so our families were on this little healing path,” Sturgeon tells Exclaim! “It became an important little microcosm for us to make sure we were taking care ourselves and doing things so that we didn’t end up like our dads, but also that we were supporting them and their well-being.

“We were total hippies,” he says their early days. “We just dipped out into the woods and would escape for weeks on end. We started writing these weird songs that we had a pretty big vision for, and it took us several years to really get the band to sound the way that we were envisioning. It wasn’t until a couple years later, when we moved to London, that things started to round themselves out.” The band now includes bassist Joe Thorner, guitarist/synth player Andrew Lennox and drummer Eric Lourenco.

In addition to music, the band seek to connect with Indigenous communities.

WHOOP-Szo’s first album, 2014’s Qallunaat/Odemin, was partially recorded in the Inuit community Salluit, QC, where Sturgeon and Palm ran a silk screening program. As a result, says Sturgeon, “our first record was kind a hodgepodge these sound experiments. It was really challenging to even record it, so it sounds pretty messed up.

“I’m Anishinabeg,” he continues, and “that part my culture is in the music.” The group’s continued desire to connect with Indigenous communities across the continent will find them in Mexico on an upcoming tour, as suggested by friend and fellow musician Eamon McGrath. In addition to touring, the band will be recording a few songs with the help a local percussionist and a series pre-colonial whistles. The whole experience will be documented by filmmaker Drew McIntosh.

“These projects feel like they’re such privileges for me, to be able to go to communities and to gain that knowledge,” says Sturgeon. “When I’m participating in those things, sensitive to the surroundings I find myself in, when I hear the voices and earn the permission to be in those places — I’m a guest in those places — I don’t wanna just take. I wanna share and contribute, bring my knowledge, but I feel that I gain so much more that sometimes it’s still a selfish thing, I guess. The eternal struggle.”

The band use their platform to promote marginalized voices.

All proceeds from WHOOP-Szo’s latest release, a split seven-inch with Halifax rockers Walrus, will be donated to London Girls Rock Camp. Originally, the bands compensated cover artist Jeremy Bruneel by paying for his daughter, Violet, to attend the camp, at the artist’s suggestion. “We thought, ‘That’s a great idea. Of course we’ll pay for Violet, that seems like a very reasonable trade-f, but why don’t we try and create the opportunity for other kids to go at the same time?'” says Sturgeon.

“Jeremy’s looking out for his daughter to go to camp, and I think that’s totally reasonable. It’s a great tradef, and it just makes me think, ‘Well we need to make more space for other kids to get to go, whose dads maybe aren’t artists.'” The original painting was auctioned f for around $2,500 dollars, which will be used to fund all the camp’s meals and allow several girls to attend the camp.

Sturgeon sees the decision as a necessary investment in order to create a more equitable music scene moving forward. “You look at the painting and there are nine bearded white-looking dudes, and one woman. I think that speaks to the music community. Not to discriminate against my musical friends because they’re males, but at the same time, we need to make sure that we’re contributing to creating equality across the board.”

The band’s thorough touring schedule reflects their desire to connect with smaller communities.

“I think, in 2016, we realized that we were on the road for 32 weeks,” says Sturgeon. “I think it’s important. To be fair, there’s a little bit a spotlight being shone on some major centres, which is nice that Canadian music is so recognized internationally, but there’s so many small towns along the way just craving something a little bit different. We feel really accepted. We can pretty much go anywhere in the country and have a nice place to stay, great conversation and a pretty decent show. We’re lucky that way.

“We play the smallest towns from Aylmer, just outside London, to Fredericton, which has a st spot in our hearts. We’ll go out to Port Greville, NS and stay with our friends Construction & Destruction. We’ve even played the town hall there. And the audiences are always accepting. You’d think that they wouldn’t be accepting this weird, experimental, heavy, loud band, and then we just get taken such great care . It’s always surprising.”