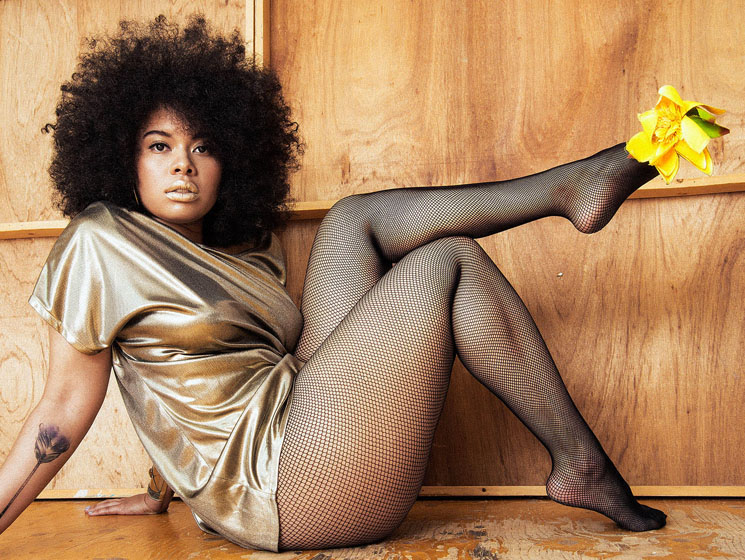 Whoever said disco is dead hasn’t met Tush. The Toronto-based troupe have been spreading the disco gospel in one form or another since 2015, featuring a cast scene veterans coming together to get crowds moving and grooving.

Originally a live disco cover band with a rotating lineup, Tush have settled on a core membership and written original material for an upcoming EP, swiftly moving past their live origins to solidify themselves as a serious musical force. We spoke with vocalist Kamilah Apong about the band’s history, relationship to disco and upcoming plans.

Tush was formed, in part, on Craigslist.

Apong’s first involvement with what would become Tush came when she responded to a Craigslist ad for a vocalist for a live disco band, which became Mainline. “The internet is good and bad,” Apong tells Exclaim! “Craigslist can have a lot risky clicks, y’know? Sometimes you’re really not sure what the fuck you’re actually clicking on, and who’s gonna be there. But that was a good click. That was a good click for me.”

Tush evolved from Mainline out a desire to establish themselves as an actual band, complete with original songs. “I wanted to write more original music and so it made more sense for us to branch f so we could take things a bit further than just being a local party band.”

Apong suggested the name “Tush,” but not for the reasons you’d think.

For a band making upbeat music to groove and dance to, a name like Tush seems pretty apt. But according to Apong, booty shaking wasn’t even on her mind when she brought up the name. “I wasn’t thinking about butt, I really wasn’t. I wanted something cute, quick and memorable. It’s a one-syllable word,” she says. “I don’t know how I missed that, especially considering I’m quite a sexual person, but that wasn’t my main objective in picking that name.

“I do love booty and I love my booty, so I mean it works, but I wasn’t like, ‘I’m gonna name it after my ass.'” That being said, Apong stands behind the band’s decision, finding it a perfect fit for their dance floor-oriented disco groove sound.

Though Apong grew up listening to disco, it wasn’t until she had joined the band that she dove into the genre’s socio-political history. “Politically, there’s a lot to dig into for me, identity-wise. Women really ran the ship, in my opinion,” she says.

“For me, as a black woman, when I am singing disco and looking for influences and inspirations from other black women who have pioneered this genre, it’s incredibly liberating. It’s really about being super honest and super raw for a lot them, and I find it really resonates with me. There’s a lot freedom in that for me. And a lot being able to relate with that kind femininity, I find. It’s very empowering and I find it very authoritative in ways. When I’m hearing Patti Jo singing or Venus Dodson, I’m gonna fucking listen.

“Their voices are just so powerful, and on stage, even more so. It just feels kind magical, in a way. There’s a lot that identity, relational aspect for me in disco. But also, it’s so much just about things that I think are really important right now, especially in the state the world that we’re in currently. Let your ego out. We’re here to fucking dance. That’s it. We’re here to dance and really let loose.”

With their original music, Apong and Tush seek to delve into disco’s darker side.

When learning more about disco’s history, Apong was surprised to learn about the genre’s darker lyrical content, in contrast to its upbeat dance sound. “Coming into disco], I was like, ‘Holy shit, there are so many rad women who just sang their asses f about so many things like love and needing love, but also pain and agony, in a way that people are dancing to.’ Like, ‘This is wild!’ We’re having a dance party and I’m listening to these lyrics and listening to their voices and like, ‘This person is in serious pain and wants people to know about it.’ I find that super empowering.

“I live with diagnosed depression, anxiety, and I have a personality disorder, and those things impact my music. So coming to disco, I was like, ‘I don’t know if I can really write to this.’ I don’t know how to write upbeat, happy music because in my past bands and past musical works, they’re ten quite moody. But disco’s really taught me that I can do all that and still make it a dance song. My originals now, some them that we’re writing, coming up in our upcoming EP, it’s a mix some upbeat bops that are speaking about some more challenging things that you might not hear right f the floor when you’re dancing to it, but if you’re looking further into the lyrics or if you speak with me about them, there’s a lot to dig in there in terms sadness or challenges, things like that. I like playing with that duality there. It’s been a fun challenge for me, and I’m enjoying it.”

She continues, “It’s great to see that in the genre that I can still do that. It’s not just a big, afro-wearing black girl who’s just singing about dance. There’s lots complexity in there to play, which is just fun.”

Tush’s live sets are wild — not that Apong can always remember them.

When discussing the power disco, Apong brings up an anecdote from a party hosted by bassist Jamie Kidd. “We were performing, and halfway through the performance, I was dealing with some sort sexual liberation so I started headbanging. I completely lost myself. Then, the next day, I didn’t remember it. So I woke up and my neck was killing me. And one the backup singers, one my girls, was like, ‘You headbanged for a minute straight and ran into the crowd.’ I was yelling about some kind sexual liberation need or something that I needed at the time. I did not even have a recollection at the time. When people come back to me and they’re like, ‘Yeah, that was crazy,’ I’m like, ‘What? What was crazy? What’re you talking about?'” she says. “I hadn’t been drinking or anything. I get high f performing.”

Though Tush have performed mostly in Toronto thus far, the prospect spreading their disco gospel far and wide is top mind. “I want to disco all over. Not just in Toronto, but far and beyond. It’s healing for me and I want to incorporate that with travel,” says Apong.

“I’ve found that at these shows, during our hour set, I can forget about things. Not even forget about things, I can re-approach things. I don’t want to forget about them. Help me reconnect when things are feeling super isolating and super sad, and it seems like people are getting that from the shows,” she says. “If that can happen here, I truly hope, hopefully, probably, that that can happen in other places too. I want people to have that, and I think we bring that to some folks. As much as that can be spread, we should.”