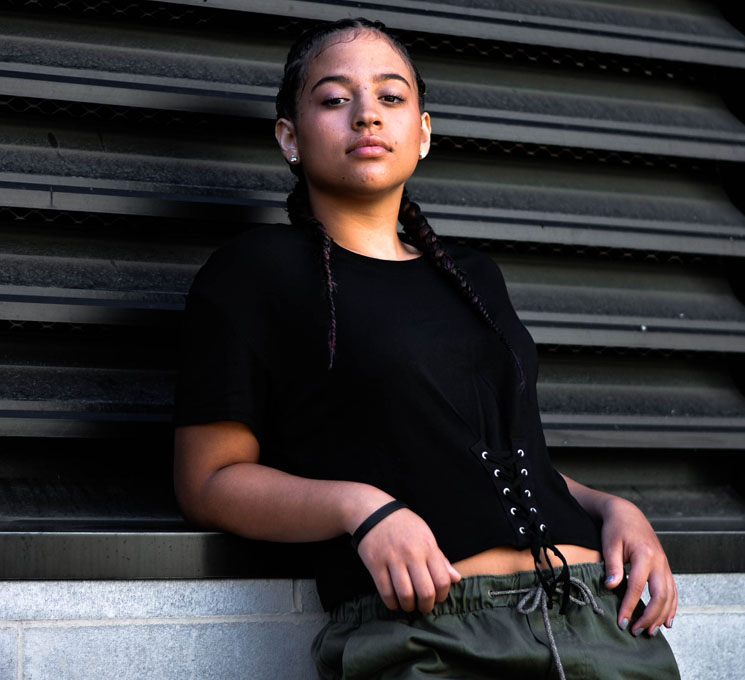 It can be tough figuring out what you want to do for a living, but Halifax’s Jody Upshaw has her mind made up. The 14-year-old has been performing on stages around Nova Scotia for the last five years, and her latest string R&B tracks is starting to earn her national attention.

Ahead her upcoming debut EP, we spoke with Upshaw to learn about her inspirations and aspirations.

Music is in her blood.

Upshaw was introduced to music at a young age by her father Marvin, formerly known as Halifax rapper KL. Says Upshaw, “He’s sort the reason I started enjoying music, because he introduced me to it and showed me his old music, and older artists, and it made me want to get involved myself.”

Of the artists Marvin introduced his daughter to, the one who stood out the most was Whitney Houston, who remains Upshaw’s greatest inspiration. “I adore her voice, and it just made me think, ‘I wanna do that, I wanna be like that too,'” she says.

Though her dad strongly supports his daughter’s music career, Upshaw says that not even the possibility a father-daughter collab can coax him out retirement — not that she’d be angling for one. “Everybody says that to me, they’re always like ‘Your dad was so good, you guys should do a collab,’ and I’m like, ‘Aaahhh…,'” she says with a laugh.

She’s already collaborated with some heavy-hitters.

Though she may not ever list her father as a collaborator, she’s already worked with several big names, including Frank Kadillac EDM group Neon Dreams and rapper Classified. She has also written songs with country artists TJ King and Makayla Lynn.

On working with country artists, Upshaw says, “That was a really cool experience for me, because it’s so different. It helped me learn different things and techniques and it really opened my mind and helped me understand music better, instead just my own genre.” The collaboration has introduced Upshaw to more country music — artists including Blake Shelton and Dierks Bentley are now in heavy rotation.

She recently began adding live instruments to her sound.

A recent collaboration with Juno-nominated soul artist JRDN led Upshaw to take up piano, which led to her playing the instrument during her performance at the Hopscotch Festival in Halifax in September 2017. “I don’t even play the piano that well, I’m just learning, and it was really cool to try that on stage,” remarks Upshaw. “I just got a keyboard for Christmas from my dad, and I put it in my room so I could learn.”

The piano isn’t the only instrument Upshaw looks to incorporate in her music moving forward. “Ever since working with the country artists, I think it’d be really cool to play the guitar and use the guitar in my songs,” she says.

Upshaw is providing a platform for artists her own age.

Though many her collaborators are significantly older, Upshaw is deliberately making space for other teenage artists: at the aforementioned Hopscotch Festival performance, she was joined by several dancers her own age, and she recently teamed up with rapper Shay Pitts on the track “Glitter and Gold.”

“It’s awesome performing with her,” says Upshaw on working with Pitts. “When we put out a song together and when we perform that song together, kids our age and kids in my school see that and they’re like, ‘Wow, that’s so cool. People our age are actually doing these things,’ and it makes them want to do stuff like that too.”

A star student, Upshaw is also a competitive basketball player.

Not only did the ninth grader speak about the importance balancing her musical pursuits with her studies — “I get homework done outside school and I just work really hard so when it comes time when I have to maybe miss a class for a performance, it’s not that big a deal” — but Upshaw also discussed her skills as a competitive basketball player. Having just completed two years playing on the Nova Scotia provincial team, Upshaw now plays for her high school, and spoke with Exclaim! during a break from basketball practice.

Though there are plenty differences between music and basketball, both require a similar level dedication, according to Upshaw, who says that the biggest similarity is “just working hard and putting the time in. It doesn’t work if you’re only doing it every once in a while. I’m here training right now, and you have to stay with it. With music, I have to do vocal exercises every day. You really have to put the work in and you really have to be dedicated, and that’s the difference in you standing out versus the others.”