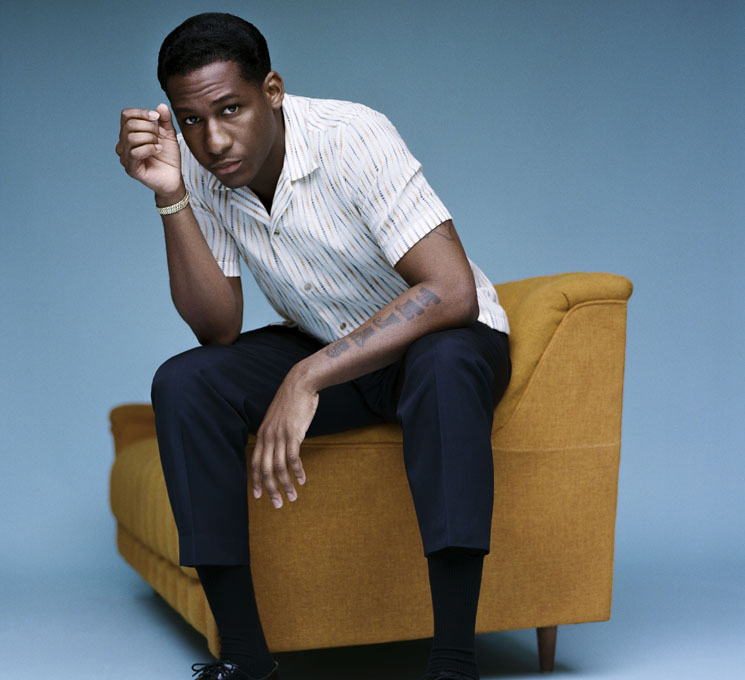 The mother doesn’t recognize her own son’s voice.

The first time Leon Bridges played his brand-new album for his proud mom and onetime muse, Lisa Sawyer, she was taken aback by the high-pitched tone Bridges affects on his new record’s leadf track, “Bet Ain’t Worth the Hand.”

“Is that you singing on there?” Sawyer asked Bridges.

“She’s all the way blown away by it,” the artist says, a devilish smile dancing on his lips.

The R&B sensation is 21 floors up in a Manhattan corporate skyscraper, lounging on a leather sa, fresh f playing a mini acoustic set and sneak-peeking his new singles for the bigwigs at Columbia Records. “Even some my friends were reacting like that. I never sang falsetto on a song before.”

“Honestly, I didn’t think my falsetto was any good. Reed] was like, ‘Sing that falsetto.’ It ended up sounding good; that was the whole thing. When I’m writing by myself, I’m comfortable. Working with these guys, they really pushed me outside my comfort zone.”

If Bridges didn’t wait a third year to release his hotly anticipated followup to 2015 soul debut Coming Home, he says his work likely would have trod the same musical path the throwback kid who charted Top 10, sold Gold and reaped a Grammy nomination on the strength Sam Cooke- and Otis Redding-styled pastiche. Warm and wonderful, but perhaps too familiar, too clean.

“I felt I was pigeonholed. I made that album because it was reflective where I was at the time, but that sound doesn’t all the way define me. It’s one those things where if you go too deep down that hole, you kinda become this novelty thing. I wanted to share my voice through other outfits, so it’s not only a classic R&B thing,” Bridges explains.

“This one is the grownup version me. When I wrote Coming Home, I was still in this religious bubble. Even when I was writing those simple love songs, I felt it was a bit a risk as far as the community I was in and my family. This is just me, a more confident me.”

Bridges has a better sense self. Now 28, the old soul within the young singer-songwriter is getting wiser.

“I turn into a whole other person when I’m onstage — that’s really when I’m in my element. Instantly, the performer in me kicks in,” Bridges says. He can envision one day elevating his already kick-ass stage show to Beyoncé or Bruno Mars levels, with splashy arena videos and pyrotechnics. “Everything has to evolve and grow. That shit looks good. It’s part the whole live experience.”

Bridges is no longer hesitant to tap into the ’90s R&B influences (Ginuwine is a favourite) that pulse in his headphones, and he’d jump at the chance to collaborate with Drake or Migos. Bridges knows casual fans might be shocked to learn he’s not pumping Motown 24/7, that he loves trap and spazzes out with his Fort Worth homies whenever Future’s “March Madness” exits the speaker.

“People are surprised. They have this perception me because the music. I’m more than this retro figure,” says Bridges, determined to write freer, to take chances. Album No. 3 is already in progress. “I felt like in the beginning, I held back a lot in fear overdoing it — onstage, everything. I held back on certain melodies. I felt a restraint within that genre — that’s why I branched out.”

Such self-assuredness has come gradually, through relentless touring (Bridges recently returned from Australia and is jacked to be heading to South Africa later this year) and an understanding how to operate as a self-confessed introvert under fame’s microscope.

The greatest challenge Bridges faces is grappling with his swelling notoriety, pushing himself to don the mask extrovert when he’d be content to slip on his headphones and walk the city unnoticed or hang out at mom’s house. Those around him describe Bridges as a mama’s boy, in a good way.

He still lives and creates in Fort Worth, TX, close to his parents, who split when he was seven years old. It’s the same city where he worked overtime washing dishes and bussing tables to provide for his family, to help pay f his mom’s debt.

“Everyone from home, they’re really proud everything I’ve done. I never expected to be all over the world in this light. For me, it’s hard to deal with, but I still love it,” Bridges reveals. “I do push myself to be personable and be that vibe, but I wouldn’t say it’s not genuine.”

Bridges’ writing process is as pure as his appeal. He’ll pick up a guitar and dive into one the melodies that’s forever spinning in his head. They run all day like subways, and he runs one out for a reporter at a moment’s notice: Da-ah-ah-AH-ah-ah… His beautiful voice warbles and fluctuates. It’s smooth, gentle and effortless. The made-up tune — sung to elaborate a point and not to be showy — resonates in a Sony meeting room that holds just two people and platters cheeses and lunch meats that will remain untouched.

The sound appears and vanishes in a blink.

“This album was more in the moment, as far as the melodies and the writing. It was just me sitting on a guitar. Of course, I’m always playing guitar, always writing, but it wasn’t a live, straight-to-tape approach,” Bridges explains.

“Me, just slouched over the table singing into a Shure] SM7 microphone. It was a dope process,” Bridges smiles. “Every song, when we finished it, we knew it was the one. I wanted to make a short and sweet statement.”

March’s double single/video release “Bet Ain’t Worth the Hand”/”Bad Bad News” piques curiosity for where Bridges is headed with his new aesthetic but, unlike a bad movie trailer, hardly lays out the whole story.

By turns disco and defiant, celebratory and cautionary, groovy and sexy, Good Thing‘s range astounds. Given a set sonic tweezers, you could pluck out bits that recall Prince, Jodeci and Raphael Saadiq. The airy dance floor shaker “If It Feels Good (Then It Must Be)” feels like it could be perfectly at home on Michael Jackson’s Off the Wall. Bridges says he could take each tune and build an entire album around that sound. In fact, that’s the plan for his next project.

“That’ll kinda be the vibe for the third album. I’ll make a whole album full songs like ‘Shy’ or something,” says Bridges, excitedly. “Me and my guys in Fort Worth, we were already making some songs that are way more out there than this record. We had to kinda bring it back with this one.”

“Shy,” a head-nodding love pitch from one introvert to another, is one the better things on Good Thing. “I feel like I’m always shy. I’m always shy when it comes to meeting women. I never try to overstep boundaries. I don’t really approach a chick unless the vibe is right, unless the energy’s right,” says Bridges, whose taste in clothing alone would attract a glance. Fame and fortune help.

“The quality women has definitely gone up,” he laughs. “It’s great. I just make sure I’m safe and be wise about who I allow in my life. I’ve met some amazing women. It’s dope because the women I’ve come across are all solid chicks, not the ones that’ll be scamming or got-nothing-to-lose kinda chicks.”

Ironically, the stinging heartbreak we detect on Good Thing is not the proprietorship its author. Bridges weaves his own experiences in with those family, friends and even the points view from those he may have hurt.

“I write to paint that picture for somebody else to relate to. A lot that stuff has come from previous relationships I’ve been through,” he explains. “Honestly, I’ve only had one serious romantic] relationship in my life, and that was in 2014. I ended it]. That was right before everything started to pick up and I signed with Columbia and started touring the world.”

The track “Forgive You” sits at the LP’s core, both literally and emotionally. Bridges sings as a lover who’s willing to stay through pain caused by the other. In real life, however, the roles were reversed. Bridges has played the forgiven, not the forgiver in this scenario.

“Man, I’ve never been in that position where I’ve had to forgive somebody too much, thankfully,” he says, thinking back to his ex. “It’s about putting down the pride. I believe everybody deserves a second chance, not to sound simple. But that song I wrote from my ex-girlfriend’s perspective. It’s her telling me, ‘I forgive you.’ “

Such smart tweaks on the well-trod path the R&B love song are what gives Bridges an edge in a flooded market. Substance gets slid underneath the shine. When the artist is at his best, he’s simultaneously reminiscent and refreshing, ground-breaking and timeless.

Take his forthcoming third single “Beyond,” for instance. We tell Bridges we can envision two young newlyweds cueing it up for their first dance at a wedding reception.

“Oh, man, it’s totally that nature. It’s a nice little twang moment on the album,” Bridges agrees. The protagonist in “Beyond” is experiencing cold feet not because he’s afraid his relationship won’t end happily ever after but because he’s fearful it will. What do you do when you’ve found The One?

“I feel we’ve all been there,” he says. “For me, it speaks to everything I’m experiencing right now. It’s hard to commit to a certain relationship. That whole feeling , what if you do find that woman who has the potential to be your one and only and the fear wanting to go forward.”

With his new baby, a tight fering heavy on sticky love songs and radio-ready production, Bridges is openly gunning for the Best R&B Album Grammy he missed when he was invited to the gala only to watch acts like D’Angelo, the Weeknd, Bruno Mars and Alabama Shakes walk away with trophies.

Inside Columbia’s walls, Good Thing has been referred to as the biggest sophomore LP since Adele’s 21. Lty expectations.

“I was just inspired to make an album that was undeniable,” says Bridges. He sounds more matter–fact than cocky. “If I would’ve released an album a year or two ago, it would’ve sounded closer to Coming Home. That kinda album would’ve made sense two years ago.”

Not now. Not now that Bridges has played with his craft, expanded his voice — both narratively and tonally — and used all those months away from the studio to sharpen his stage show and jolt his conviction.

As a refreshingly brash moment on “Bad Bad News” reflects — “I hit ’em with the style and grace and watch they ankles break / I know you wish I would fade away, but I got more to say” — there’s a little more modern strut in Bridges’ old-school game this time ’round.

“I feel like I’ve been gifted to create an album that could win. That’s just the confidence in me,” he says. “It’s not all about the Grammy at all, but it’s like, why not?”

Leon Bridges has announced tour dates that include Vancouver (August 16), Toronto (August 27) and Montreal (August 28). You can find the complete tour dates here.

Good Thing comes out on May 4 on Columbia Records.