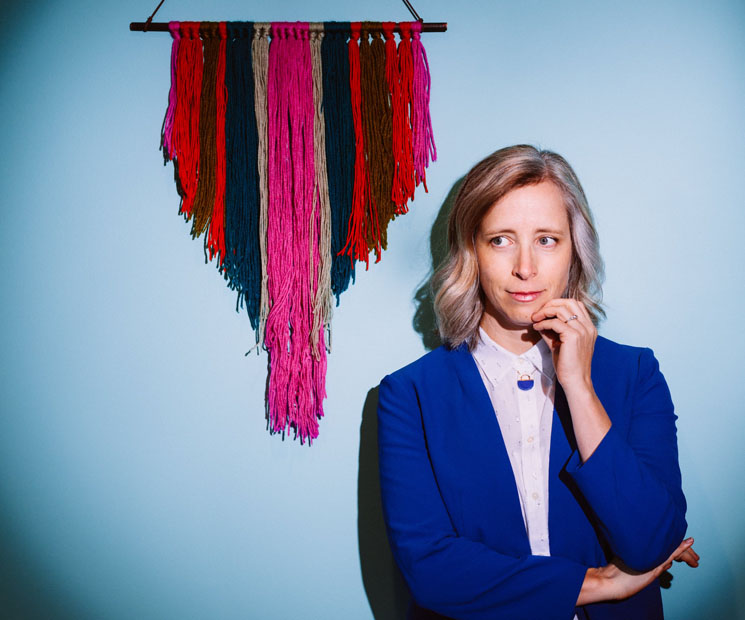 Over the course ten albums and nearly two decades, Portland OR-based Laura Veirs has quietly and independently become one the most well-respected, prolific songwriters in the U.S. Her output includes a number nature and geology-themed albums: Troubled by the Fire, Carbon Glacier, Year Meteors and Saltbreakers — as well as July Flame, named after a variety peach; a kids album (2011’s Tumble Bee) and 2013’s Warp and Weft, which featured k.d. lang and Neko Case.

Lang and Case also joined Veirs on 2016’s case/lang/veirs, which saw the three greats collaborate on an album and tour, no doubt introducing Veirs — the most delicate-voiced, but not least powerful — to new audiences. Incredibly, two the best songs on case/lang/veirs were ones that Veirs had kicking around that hadn’t quite made it into her solo albums: with lang, Veirs reworked “Blue Fires” into a beautifully moody jazzy country song; and Veirs sang “Best Kept Secret,” a definite highpoint for the record.

“I culled through a lot my old stuff just to supply Neko and kd with songs,” Veirs tells Exclaim! “Because it’s hard to come up with songs when you’re a trio and people who don’t know each other. I’d just sort throw stuff at them.”

Veirs is incredibly prolific, but when it came time to write songs for her tenth album, The Lookout, she says struggled with the writing process. It took her a year to write — four hours a day, four days a week.

“In the early days, it was all about discovery and the beginner’s mind,” Veirs explains. “This is so cool and magical! I remember songwriting feeling like puzzle solving. It was this really cool mix the science-y side my brain and the artistic side, and it still is like that, but because I’ve been doing it for so long it’s harder to surprise myself. That’s my challenge as a writer; it starts to lose its lustre and you have to work to surprise yourself.”

In order to surprise (and inspire) herself in writing The Lookout, Veirs made three sets songwriting cards before she started writing. She would pick a card from each category (mood, lyrical theme and musical theme) and would do what the card told her to do. “The music card might say, ‘write in 5/4’; the lyric card might be ‘use the first line a poem’ and the mood might be ‘sad’ or whatever,” Veirs says. “I was tricking myself into feeling surprised and forcing myself to try something new. There were aspects it that were super annoying (because you had to do what the cards told you to), but it forced me to be disciplined and do the work.”

Of the 117 songs that Veirs wrote that year (about 30 which were from the card exercises) she recorded 14 and kept 12. “I have an intuition when I’m culling through the massive amount stuff I’ve written — certain ones just leap out,” Veirs says. “My husband producer Tucker Martine] is great with helping with that. It’s not hard for me to write songs; it’s hard for me to write good songs, songs that resonate to me and mean something to me and make me feel like, ‘Yeah I can sing that 50 times on stage.'”

Veirs used to teach songwriting and finger-style guitar to students and also volunteered at Rock’n’Roll Camp for Girls in Portland. Teaching songwriting, she says, “I was really more like a life coach. They just couldn’t finish songs. They were plagued by self doubt. There was something overwhelming to them about committing. Putting themselves out there to the extent that they needed to just to play for me or themselves even. Their own judgement I guess, is what they were worried about.”

“At Rock’n’Roll Camp for Girls it was interesting, because at this camp, the eight-year-olds were free and spontaneous and creative and so fun to watch, but by 18 I was pretty bummed. They were looking down, trying to be gorgeous. They are shy and self-conscious. What can we do to allow adults — which is essentially what 18-year-olds are — to feel creatively free? That’s what I was seeing in my songwriting students, this intense self-consciousness and judgement that would not allow them to do their work.

“I think one my strengths as a songwriter is I don’t have much a filter so I can finish songs easily. I’m obsessed with finishing things, it’s a personality quirk. The problem with that, taken too far, is I don’t dig deep a lot. I just skirt the surface and that’s why so many the songs don’t get kept, I think.

“One my challenges to work with moving forward, is to not let the filter, or the judging critic, become so powerful that I can’t write, but also maybe to filter a little bit more as I’m going and maybe not be so obsessed with finishing the song, but just kind work through it and see how I can get deeper into it, deeper into difficult and painful emotions, which is where the good stuff is, but it’s uncomfortable to go there. When I have gone there it has produced good work.”

Veirs didn’t have a theme in mind going into writing The Lookout, but one emerged in the process: danger, threats, people feeling vulnerable, protectors, people up on cliffs or out in boats, lookouts, watch fires.

“I see music as a way for people to connect and feel less lonely,” says Veirs. “I feel artists have a responsibility, especially now in our chaotic political world, to provide solace for people. Because that’s certainly what I get from music.

“It’s important to me that the song means something to me deeply at a personal level and the way I do that is by speaking a detailed truth about something that has happened to me, and then I can only hope that it’s not so personal that people don’t get it]. People can relate to detail so I try to put a lot detail in my songs but I leave the choruses fairly open to interpretation so other people can put their own lives into it.”

Veirs, who has two kids (5 and 8) has been embarking on new projects lately, like writing her first children’s book (Libba, about Elizabeth Cotton) and interviewing musician-parents for her podcast Midnight Lightning. “Just learning how to interview has been fun,” Veirs says. “Researching, preparing, and when I’m there just winging it. Getting to meet other people in a similar boat. The first season I interviewed mothers; the second season will be dads. It will be interesting to see the difference between moms and dads. I think men don’t get asked as much about parenting] so it’s important to ask them too.”

The Lookout is out now on Bella Union.