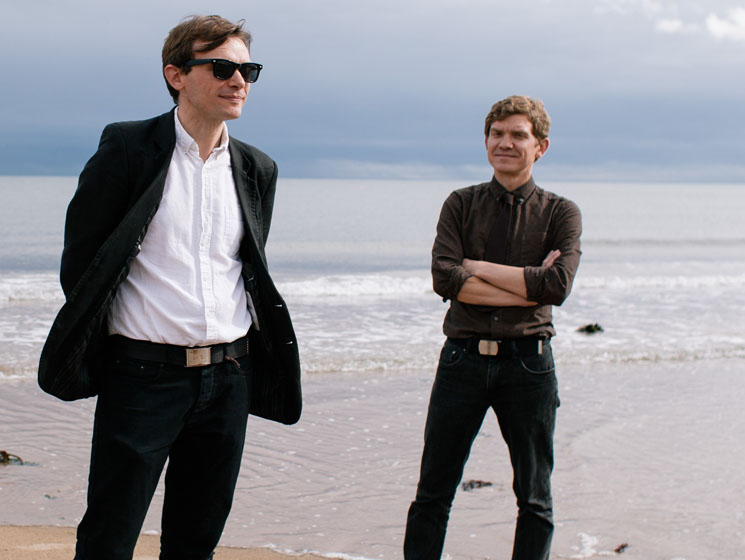 Field Music duo, brothers Peter and David Brewis Sunderland, UK, are about to release Open Here, their latest in a fiercely independent, proggy, poppy career that began in 2004. This record finds them wrestling with both personal and political themes, captured in the more direct songwriting they have engaged in since both becoming parents. Exclaim! spoke with David about directing one’s fury, creating on the fly and his town’s musical leanings.

First single “Count It Up” is one those more direct songs, in this case about privilege. “Time that I used to spend pondering on things isn’t really available to me since becoming a parent], so I’ve tended to write songs in short bursts intense feeling one kind another — which just so happens that most those feelings have been anger,” David says. “That’s the tenor the times in the outside world.”

Prior to recording 2016’s Commontime, which occurred shortly after his son was born, David says that he “would never go into the studio with a half-finished song. It would always be completely done, everything kind planned. With Commontime I would come in, well it’s like, ‘I’ve got these chords, I’ve got this riff, I’ve got most the lyrics, let’s just start.’ That was quite liberating for me, and it has been again, this time.”

“No King No Princess” was written in response to the birth David’s young daughter. “Even from tiny, tiny, tiny kids, the personality traits that people ascribe their gender, rather than the millions other factors that shape a child’s personality at that age — I don’t want her to feel like she can’t be confident or extroverted, or I don’t want her to feel like books aren’t for her or trains aren’t for her or colours other than pink are somehow f the menu. I want her to be able to do whatever she wants. Even from when she was a tiny baby, realizing how bombarded kids are by these messages, it made me furious,” he laughs. “Being a princess just seems so boring. I don’t want her to be passive. I want her to get stuck into everything, and she does — you know, that is absolutely her.”

These lyrical themes, which express the band’s values, are juxtaposed by instrumentation that is ten times jubilant and lushly orchestrated — with a surprising amount groove. “There’s definitely an element wanting to sneak the lyrics over to people, make somebody’s ears prick up and then when you start paying attention to the lyrics, then it unfolds into something else.”

The group have been based in Sunderland for their entire career, a city whose ’90s musical leanings towards “Northern lads” Oasis can still be heard today — “pretty much the antithesis Field Music].” Having received an eviction notice for their studio seven years while recording Open Here kept the band working fast, capping f a string recording and producing for themselves and other local bands in their small industrial space. “Sunderland, especially, is a place that’s struggled. It’s struggled to make use what cultural things it has. And it feels like it’s kinda getting back on its feet, maybe? There’s a certain amount optimism at the moment. It’s fleeting,” he digresses. “Like a lot provincial towns — somewhere there are probably loads and loads metal bands,” he adds. “But I would never come across them. I’d like to go and see some them, but I wouldn’t have a clue how.”

With a move into the band’s new studio and touring ahead, the band have a busy future ahead them. David is looking forward: “My work and practice is going to completely change in two-and-a-half years, when Mary starts school. I’ll be sitting in me house like, ‘I’ve just got all day to work!’ And maybe then I’ll start wasting my time again,” he chuckles. “I’ll start writing minute-and-a-half long songs with three hundred sections again.”