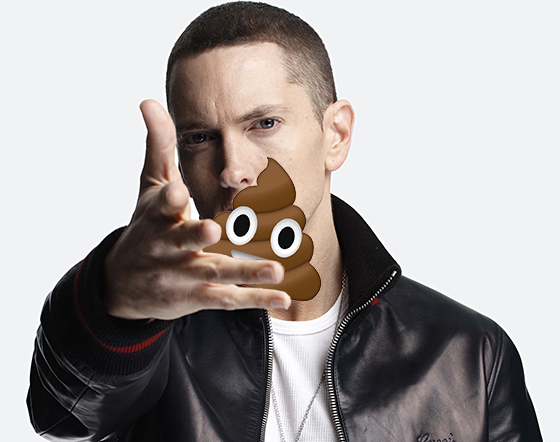 Rap legend Eminem still populates his songs with ableist slurs, rampant misogyny and homophobia, but he’s also realized that hating on President Donald Trump is good for his brand. As such, he’s been sticking it to the man regularly since last year’s viral freestyle. In a new Billboard interview, he’s laid on the Trump hate even thicker.

“I know that Hillary Clinton] had her flaws, but you know what? Anything would have been better than Trump],” he said.

Lest you think he was kidding, he painted another vivid visual: “A fucking turd would have been better as a president.”

While we’d love to end that thought by imagining an anthropomorphic poo sliding around the Oval Office and turning the White House brown, Eminem kept going in on Trump.

“There is something to be said about the person who really felt like he might do something for them — and he just fucking duped everybody,” he continued. “I don’t see how somebody could be middle class, busting their ass every single day, paycheck to paycheck, who thinks that that fucking billionaire is gonna help you.”

Eminem concluded by saying, as he’s said many times, that he won’t mind if his anti-Trump rhetoric resulted in a loss fans.

“At the end the day, if I did lose half my fan base, then so be it, because I feel like I stood up for what was right and I’m on the right side this.”