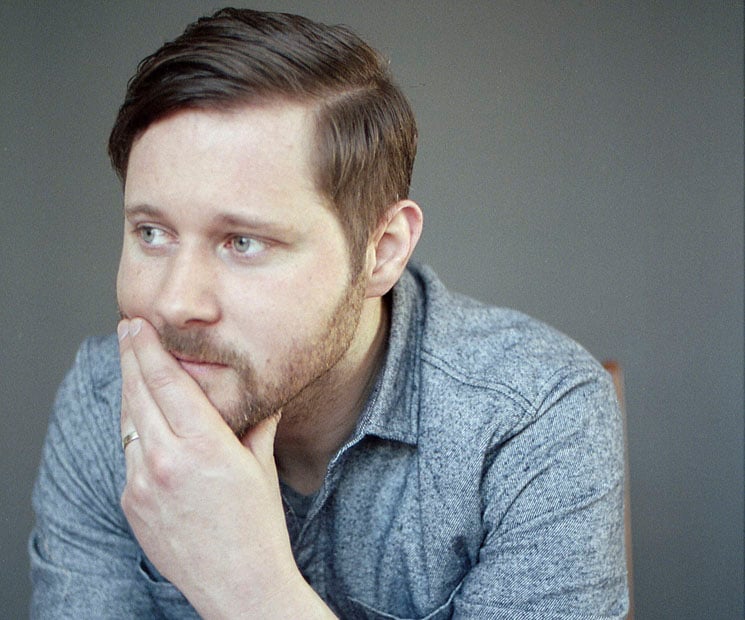 It’s been a quiet couple years for Vancouver songwriter Dan Mangan, but that’s about to change. Today he returns with a new single, a doting piano ballad called “Fool for Waiting,” which will be followed by a new album later in the year.

The new single is a heartfelt love ballad in which Mangan’s gruff, earthy croon is supported by little more than piano chords and sparse drums. You can hear it for yourself below.

Having spent the last few years distancing himself from folk music and embracing moody full-band arrangements, he has now returned to his roots as a singer-songwriter.

Notably, the new material is being released under his own name, rather than the full-band moniker Dan Mangan + Blacksmith. He opted to abandon the band name after drummer Kenton Loewen left the group amicably a couple years ago.

Mangan explains, “He was the one who thought up the name Blacksmith. It didn’t make any sense to keep going under that moniker.”

Mangan still plays with bassist John Walsh and guitarist Gordon Grdina, and he captured “Fool for Waiting” live f the floor with drummer Matt Johnson (best known for playing in Jeff Buckley’s band and appearing on 1994’s Grace). This was part a session with producer Simone Felice (the Lumineers, Bat for Lashes) and engineer Ryan Hewitt (Red Hot Chili Peppers, Dixie Chicks) at the Warehouse Studio in Vancouver.

Additional sessions will take place with a different producer in Los Angeles in March, with the goal releasing further singles followed by an album this year.

Not all the new material sounds like “Fool for Waiting” — in fact, he even considered pitching that song to a more famous artist like John Legend or Sam Smith before his sister-in-law heard the demo and convinced him he should sing it himself. But the single is indicative a return to the earnest lyricism and classic songwriting style that he used to be known for.

“In every interview I’ve ever done, I talk about how I want to push myself to uncomfortable limits and try different things,” Mangan says. “Up until this point, that’s always been a move to the left — getting weirder and weirder and weirder. In a way, coming back to something a little bit more straight is actually incredibly uncomfortable for me.”

Part the reason for this new perspective is his blissful family life. He’s happily married to his longtime partner Kirsten Slenning, with whom he has two young children. As a result, his music has grown more emotionally open and less overtly political — something that’s ironic given the world’s fraught political climate.

“You have a couple kids and you become a pile mush. I’m ster. I care less about having a hard edge. I embrace the sweeter, ster things in life more, because I have these little kids and they bring that out in you.”

Although he’s hesitant to talk too much about his plans for the new album — it’s not even fully recorded, after all — it’s clear that it will be reflective Mangan’s life as a mature family man.

“I feel old,” he admits. “If you examine my life, I spend a lot time changing diapers and emptying the dishwasher. I don’t feel 22 anymore, and I certainly don’t look 22 anymore. There’s a certain part me that’s sort like, maybe I’m ready to do something a little bit classic.”

Although Mangan will spend much 2018 gearing up for his new album, he’s also got a couple other things on the go. He has composed the soundtrack for the upcoming CBC miniseries Unspeakable, about the tainted blood from the 1980s (when thousands Canadians were infected with HIV and hepatitis C), and he’s currently in the midst scoring an animated Netflix series.

Both soundtracks are instrumental, and the latter was made entirely with synthetic sounds and drum samples; Mangan calls it “very bombastic. Very magical and over the top.”

He explains, “It’s a platform that connects spaces and performers, almost like Tinder, like a dating service. And then it’s kind like Airbnb, because it’s utilizing private spaces. And it’s a ticket platform right in there.” The app is currently in its beta phase; a st launch is planned for later this year, and a full rollout will follow in 2019.

While we wait for more details about Mangan’s new album and his assortment projects, listen to the stream “Fool for Waiting” below, where you’ll also find a series newly announced tour dates.