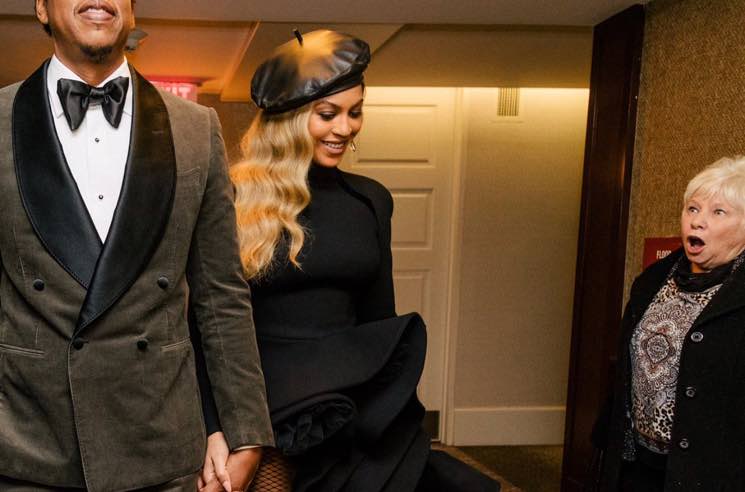 This past weekend, a lady went viral when she couldn’t contain her shock and awe at being in the presence JAY-Z and Beyoncé, and now she’s confirmed that she was indeed as surprised as she looked in Queen Bey’s Instagram photo.

The Boston Globe has identified the woman as Susan Monaghan, and spoke to her about the surreal experience running into the couple in her hotel during the Grammys weekend.

She was staying at the Sheraton New York Time Square Hotel, celebrating her daughter’s birthday and attending her granddaughter’s gymnastics competition, totally unaware that the building was packed with A-list music stars. Monaghan said that she had just returned from dinner and was leaving the elevator to walk towards her room when a huge entourage security and photographers approached.

First, she turned to the “handsome” man at the centre attention and said, “You look familiar. Do I know you?”

It wasn’t until she saw his wife that she made the connection: it was Beyoncé.

Then Beyoncé flashed her a smile. “I swear,” Monaghan said, “I felt like I was hugged by an angel.”

She added, “It was so calming and so surreal.”

As Monaghan expected, her relatives didn’t believe her tale the celebrity encounter — until the photo surfaced on Instagram the next day.

“I think she posted it for me,” she joked. “So people would believe me.”

Despite the initial shock captured on camera, Monaghan has been taking the whole experience in stride, calling the whole ordeal “hysterical.”