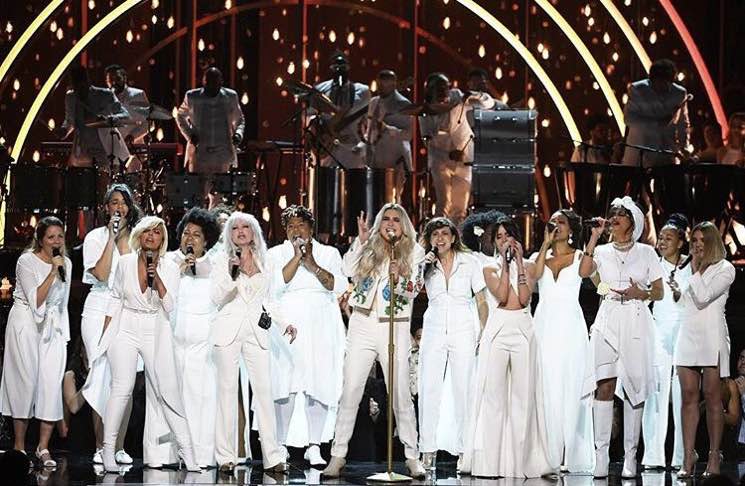 The 60th Grammy Awards celebrated “music’s biggest night” last night (January 28), but it was far from being music’s most diverse evening.

Despite attempts to capitalize on the momentum the Time’s Up movement, viewers and attendees alike have pointed out the gaping gender imbalance the award recipients.

A meagre 17 percent the total awards handed out were given to women or groups featuring a woman (with other estimates coming in at even lower numbers). Only one award was presented to a female winner during the televised broadcast the show — Alessia Cara’s Best New Artist win.

“It has to begin with… women who have the creativity in their hearts and souls, who want to be musicians, who want to be engineers, producers, and want to be part the industry on the executive level,” he told Variety. “They need] to step up because I think they would be welcome. I don’t have personal experience those kinds brick walls that you face but I think it’s upon us — us as an industry — to make the welcome mat very obvious, breeding opportunities for all people who want to be creative and paying it forward and creating that next generation artists.”

Needless to say, the backlash has not died down.

Grammys producer Ken Ehrlich was also asked for comment on the #GrammysSoMale backlash, and told Variety, “It’s not for me to talk about.”

When asked about the omission a performance from sole female Album the Year nominee Lorde, Ehrlich said: “We have a box and it gets full. She had a great album. There’s no way we can really deal with everybody.”

Despite barring Lorde from a solo performance, the Grammys did try to shine a spotlight on the Time’s Up movement with a performance by Kesha. Introduced by Janelle Monáe, Kesha was joined by Andra Day, Cyndi Lauper, Camila Cabello, Julia Michaels and Bebe Rexha for a rendition “Praying” — a song widely believed to be directed at her former producer and alleged abuser Dr. Luke.
The performance, while emotionally powerful, has drawn criticism from some Twitter users who claim that the Grammys exploited Kesha’s personal struggles.

Needless to say, the Grammys have a long ways to go before being able to claim gender equality — a problem Ehrlich thinks will be solved by the bringing in the increasingly controversial Taylor Swift. “Hopefully we’ll see her next year,” he told Variety.